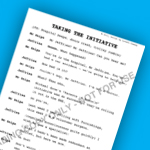 When you sit down to write a sketch – consider why you’re doing it first!

For instance, if I write a sketch from an idea that came to me – great. 90 seconds of dialogue later (I’m a big believer in keeping them short), I’ve got my sketch. Now – where to go with it?

If you can submit it to a radio show, great. Upsides – if it’s broadcast it will probably find a big audience. Ego massaged? Job done. That’s one outcome. Downsides – radio (my preferred choice) is a hungry medium, and once it’s broadcast, that’s it gone. You might be paid up to about £90 depending on the show (and that’s the top end) for your efforts, about half that if it’s a weekly news show on something like Radio Four Extra. Good for an evening’s work? That’s something only you can decide!

We have a script publisher – they operate online, and they don’t actively push your scripts to agents, but they have hundreds of drama groups and schools that browse and purchase performing rights for their revues and end-of-year shows. Only £2 / £3 a time for performances, but I have sketches on there that have earned £100+ from repeated performances – and royalties will continue to come in, whereas the radio sketch is a one-shot deal. Don’t achieve fame that way, though!

Topical sketches are good – they are generally welcomed by Podcasts and the like and why we are having such fun writing for The POD Delusion at the moment. The downside? As it stands, there is no future value in the work. UNLESS you can extract the main theme and make it a little more timeless, or work it in such a way that the names can be changed to reflect the current Z-list celebrity or similar at the time of performance. That means the central conceit needs to be a little more generic, but it does give it a better shelf life.

It’s maybe not something people consider at the start of the process – but I always do. I need to know WHY I’d tackling the medium I chose – some do it for love of the craft, some for the adulation, some for the royalties. Just be aware that some pathways close down some end results – so use your comedy SatNav early on in the process, and you might just get where you want to be.